About HGT About Laboratory
about us

Genetic Testing of the gastrointestinal microbiota.

The profiling of human gut microbiota can depict personal health information that is hidden in the gut microbiomes.

Majority of the microbes that live within humans are located in the gut. These microbes are very important for nutrient metabolism and absorption as well as immune system regulation. the gut is also a very complex neural network which often refers to as the Second Brain. gut microbes are also related to numerous physical and mental diseases according to the current research.

The genetic testing using next-generation sequencing (NGS) technology can profile bacteria in your gut. This data is then compared with more than 150,000 strains of bacteria in the global bacteria database to confirm the type and proportion of microbes in your intestine. 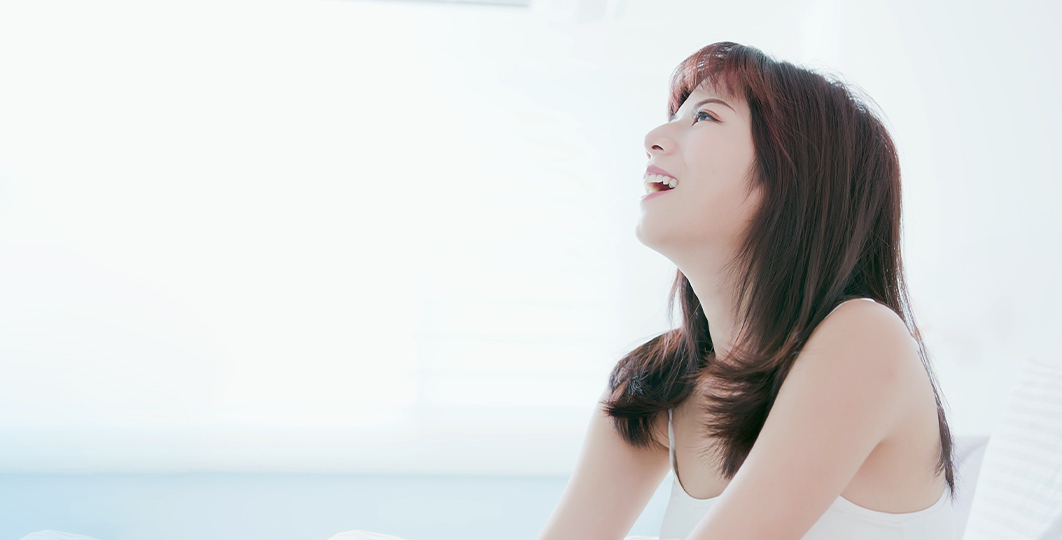 The detection of human gut microflora is sampled at home in a non-invasive and simple manner. Genetic information regards to the gut microbiome can be obtained through the simple collection of feces by sampling rods.

HGT’s microbial genetic testing has been applied to categorize Taiwanese microbial groups, and compared with the US published research literature regards of gut microbe categorization, Enterotypes of the human gut microbiome [Nature. 2011 May], Published Literature: Diversity and enterotype in the gut bacterial community of adults in Taiwan. [BMC Genomics Volume 18, Articlenumber: 932 (2017)]

research by the City University of Hong Kong which published literature about the analysis of skin flora among the various human race: Insights into the pan-microbiome: skin microbial communities of Chinese individuals differ from other racial groups [Scientific Reports, Published: 16 July 2015]

a study case of the Mackay obstetrics and Gynecology infertility Center for analysis about the correlation between clinical infertility and semen bacteria, which further published as: Bacterial Communities in Semen from Men of Infertile Couples: Metagenomic Sequencing Reveals Relationships of Seminal Microbiota to Semen Quality [PLOS ONE, October 2014]

a research case by the City University of Hong Kong to analyze the bacterial content of the subway station air, which further published as: Indoor-Air Microbiome in an Urban Subway Network: Diversity and Dynamics [Applied and Environmental Microbiology, November 2014]

Take the inspection rod out of the package

Dip the collection rod on the feces 10 times at different locations.

Place the collection rod into the storage tube and screw the bottle cap tightly. (DO NOT decant the storage buffer)

Place the collection rod into the storage tube and screw the bottle cap tightly. (DO NOT decant the storage buffer)

Remove the collection paper from the toilet and flush it into the toilet.

Stick the serial number sticker on both storage tube and test form, and place the storage tube into the sealed bag.

Fill in the test form and questionnaire and send them along with the storage tube and test form to the laboratory in a refrigerated manner. 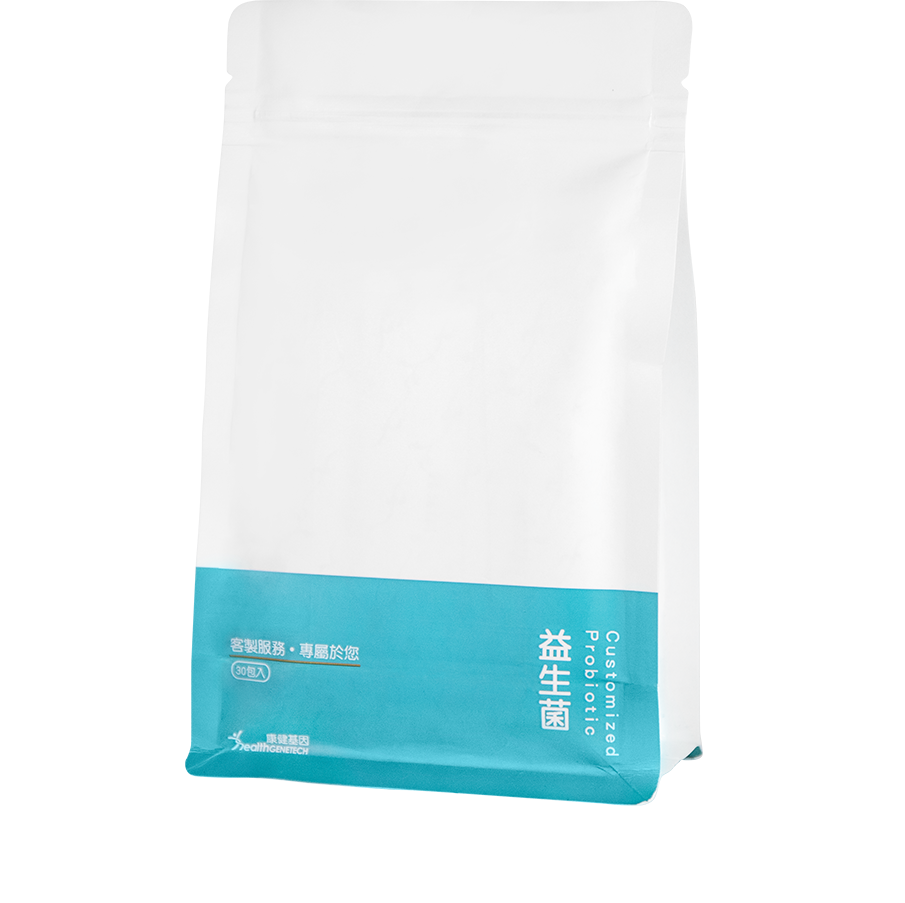 Perform a second test after 90 days of use

Give health advice and adjustment base on the test results.

This type of body condition is based on the analysis of the hidden bad bacteria (opportunistic bacteria) and specific pathogens to determine whether there is an excess of harmful intestinal bacteria. It belongs to the groups of excess harmful bacteria, excess Clostridium difficile, vulnerable toward diarrhea, and vulnerable toward colorectal cancer.

The product focuses on bad bacterial regulation systematically. Does not contain antibiotics. The composition contains antibacterial protein which inhibits harmful bacteria; while inhibiting the growth of harmful bacteria, it increases the prebiotic and concentrated probiotics. It can quickly increase the number of good bacteria while suppressing bad bacteria, it contains ingredients that strengthen the intestinal mucosa which further strengthens person immunity, reduces the chance of intestinal infection, and intestinal enteritis caused by bacteria.

By analyzing the trace amount of Helicobacter pylori in the gut, it can assess whether there is an excess proliferation or dormancy of Helicobacter in the gastrointestinal tract. If the proportion of Helicobacter pylori is relatively high, it can easily go with no observable symptoms or stomach pain in a short term, but gastric or duodenal ulcers in the mid-term, which will eventually lead to the increased incidence of gastric cancer in the long term.

It is a comprehensive product for regulating Helicobacter pylori infection in the stomach. The functions include balancing gastric acid, protecting the stomach wall, consolidating the gastric mucosa while improving the repair of the gastric mucosa by inhibiting the growth of Helicobacter pylori, strengthening immunity, and alleviating gastrointestinal inflammation. Concentrated probiotics and prebiotics are added concurrently. Reconstruct the gut microbiota during the gastric repair.

This type is determined by whether the microbe is prone to constipation, and assess whether the intestinal tract has a holistic decline in motility. If there is a problem of exceeding the standard in this category, it may trigger periodic constipation, it may also be a periodic cycle, or occur when eating particularly type of food.

It is a comprehensive product for constipation and a decline in intestinal function. Ingredients of this product contain large amounts of dietary fiber that promote bowel movement. The addition of comprehensive digestive enzymes to help food breakdown. Meanwhile, the number of microbes that cause constipation are indirectly reduced through incremental prebiotic and concentrated probiotics. Addition of natural fruit extract as auxiliary ingredients that can improve the smell of defecation.

This type of body condition is determined by whether the intestinal microbe has an overall nutritional imbalance after analyzing the amount of essential element metabolizing bacteria. Meanwhile, it analyzes whether the overall microbiome has insufficient anaerobic bacteria. If you belong to this body condition, it represents a sign of malnutrition, which can easily lead to long-term nutritional deficiencies.

This type of body condition belongs to generally balanced microbiota. It is mainly related to poor eating habits including a recent deviation of microbiota caused by diet (it can be reinstated after a normal diet), and the condition of excess or lack of absorption of three major nutrient (initiating involuntary partiality for particular food), flatulence, insufficient bacterial biodiversity, and insufficient total beneficial microbes.

The ingredients of daily health care products are mainly composed of many natural fruit enzymes (papaya/pineapple/apple/vegetable/combined enzymes) to strengthen the gastrointestinal mucosa, activate body enzymes, help food breakdown, promote nutrient absorption, improve indigestion, flatulence, and partiality for particular food. Meanwhile, it adds a lot of fruit and vegetable extracts/vegetable fiber/dietary fiber that are beneficial to health to promote intestinal peristalsis. At the same time, concentrated probiotics are added to increase the total amount of beneficial bacteria. 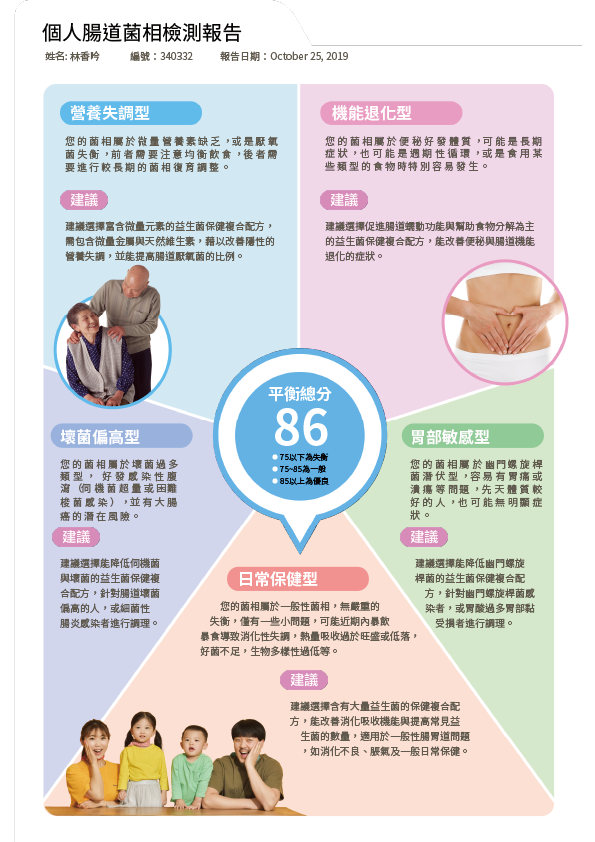 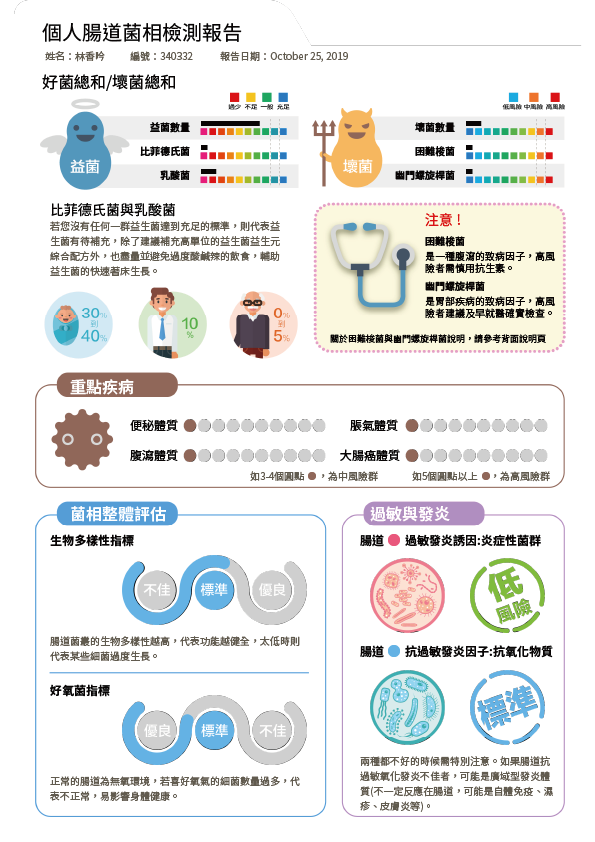 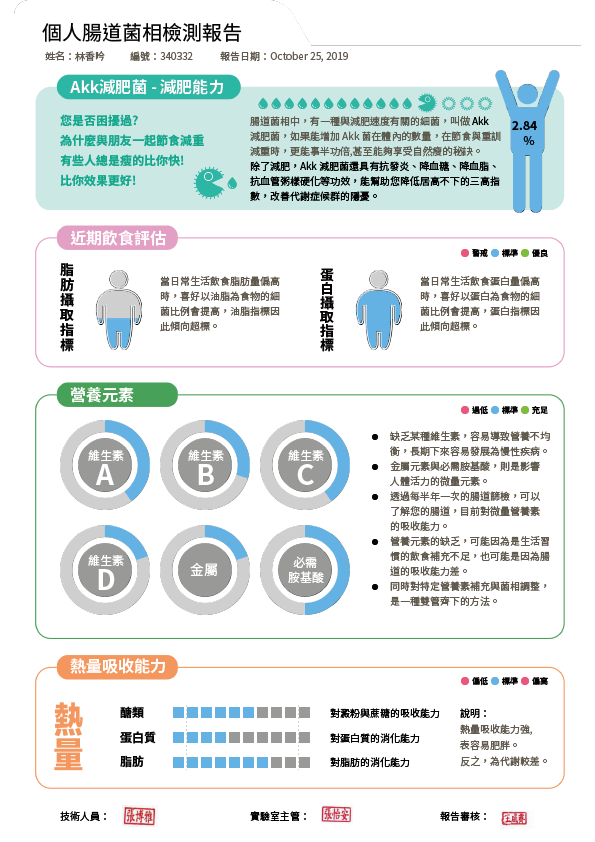 Significance :
The number of species of your gut microbes, the richer the diversity, the better,

Significance :
The composition of the microbiota is very complex and there is no certain standard. Microbiota profiling is a relative indicator of health.

Significance :
For the detection of opportunistic and pathogenic bacteria in the intestine.

Significance :
Check if the amount of probiotics in your intestine is insufficient, average, or sufficient.

Significance :
Based on the detected of microbiota, a risk assessment of bacterial-related diseases is made.

Significance :
Bacterial plays a role in assisting digestion, absorption, and biosynthesis nutrients in the human body. A balanced microbiota indicates that all functions are in a standard state.